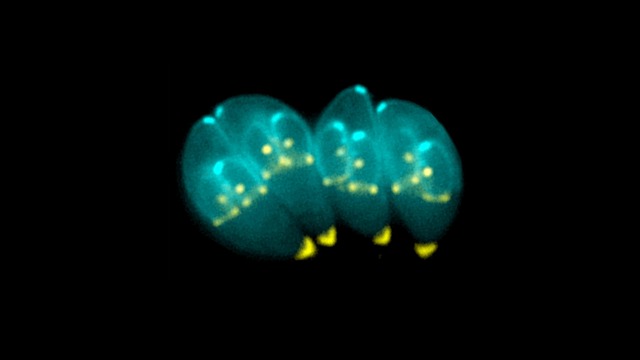 Some parasites can do crazy things, but this month’s parasite can actually change the gender of a crab. A mud crab-specific parasite, this organism is an invasive barnacle, and commonly found in the Chesapeake Bay area as well as the Gulf of Mexico, the Caribbean, and other parts of Florida. It is speculated that they made their way to the Chesapeake with oysters, as crabs are often carried along for the ride in an oyster haul. The fact that this parasite is a barnacle is often surprising to many people because the adult forms look nothing like a barnacle. The life cycle of this parasite is relatively complex. A female, free swimming larvae will infect a recently molted crab, burying into its shell. She goes through many changes and eventually takes over the crab’s body while she grows to adulthood. Upon reaching her adult stage, she forms small sacs that emerge through the abdomen of the crab, usually after a molt. These sacs are the only visible sign of the parasite, often making it hard to determine if a crab is infected with a larva or not before this stage. A free-swimming male will then come along and fertilize these sacs, and eventually they will be released into the water as larvae again. This process inhibits the crab’s ability to reproduce, and only makes them able to care for the parasitic larvae, essentially changing the gender of the crab to female if it was not previously. What do you think this parasite is??

We are fast approaching our Arctic Seal Plunge! Join us for our second year of taking the plunge into Onset Bay to support marine life.

🚨 New Patient Alert 🚨 Meet Yosemite! Yosemite is a male gray seal pup who was rescued by our friends at Marine Mammal Alliance Nantucket

It's that time of year again. Valentine's Day is just around the corner. This day is usually celebrated with a loved one, for those who

Take a look at our patient Denali during his rescue by our friends at ifaw!

Come on by this afternoon to meet us, Castle Island Brewing Co. for the Meet the Fivers Event! It’s going to be loads of fun!

Have a wonderful #sealsunday everybody!